With no further ado, let's get started with the Walkthrough! I start by loading up Civ4 and picking "Single Player" from the main menu. There are other options for Multiplayer, the Hall of Fame, the Civilopedia, and so on, but for right now we're only interested in trying out a Single Player game. The Single Player menu has 4 options: Play Now, Load Game, Custom Game, and Play A Scenario. They should all be pretty self-explanatory; Play Now is a fast way to start a new game, while Custom Game allows you to pick some more options. To give you a better idea of what you can choose for a game, I go into the Custom Game menu. That screen looks like this:

The top of the screen allows you to set the civs; naturally I can pick my civ and who I'm playing against, as well as which difficulty level I want to play on (there are now 9 difficulty levels, ranging from "Settler" up to the traditional "Deity"). You can also set teams by assigning two civs to have the same number; yes, you can play a team game with the AI if you want to even in Single-Player. Or set all the AIs to the same team and play against them all as a real challenge.

The bottom left corner is where all the map settings are stored. There are six sizes for each map (ranging from Duel to Huge), four different climates, and three different sea levels. You can also choose to start in any era you like (from Ancient up to Future) and set any of the three game speeds. As for how many map types there are, well - Civ3 shipped with three of them: Archipelago, Continents, and Pangaea. Civ4 is shipping with TWENTY ONE map scripts!

That's the full list of maps; note that these are not pre-drawn maps but scripts that create a new map for each game within certain parameters. Some of them are clearly for Single-Player (SP) and others for Multi-Player (MP), but all of them CAN be played in either setting. And for those people who were whining about the maps being smaller in Civ4: try running a Huge Terra map. The thing is gigantic; it's significantly larger than a Civ3 Huge map. Don't think we weren't paying attention to you.

Obviously victory types are in the bottom right corner. The box in the center has so many options though that I need to post another picture to show the full thing: 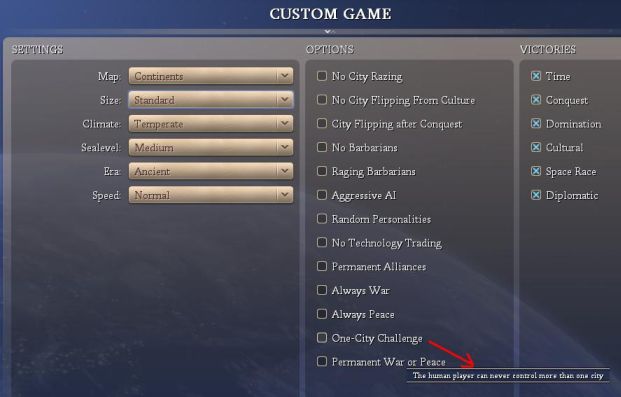 All of these are options that can be set before starting a game of Civ4. They can be set for both SP and MP, by the way, though a MP game of Always Peace isn't the most exciting thing in the world! In addition to typical stuff like barb options (watch out for those raging barbs! seriously, I'm not kidding), you can also pick some of the most popular Civ3 variants right from the menu. Yes, One City Challenge and Always War are now options built right into the game itself. Hopefully this will allow a number of people who never thought of experimenting with some of these variants to try interesting and fun approaches to the game. Also, note how moving the mouse over any of these options displays more information about it (I'm mousing over the One City Challenge here, of course).

After messing around with the settings a bit, I pick Saladin as my leader (there's a reason for this, which I'll get to in a bit) and keep everything else on the defaults. Going to be playing on Noble, since it's the "even" setting where the AI gets no advantages or disadvantages. Once everything is set properly, I click the launch button and get started! Here's what the starting position I drew looked like: 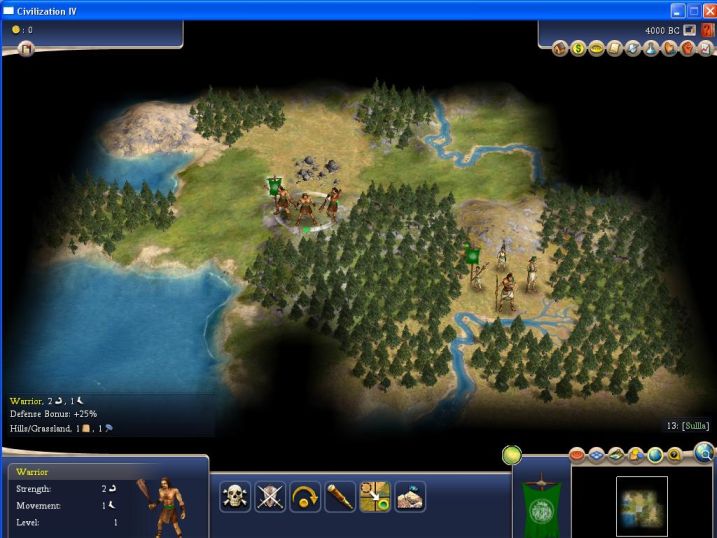 Note that I've shrunk these pictures down a lot to reduce the bandwith usage on this site... A lot of people are going to be reading this, so bear with me on the need to keep the pictures fairly small. Anyway, let me try to explain the main game screen a bit before I start doing anything. At the top right are all my advisor buttons, which are also accessible using the function keys (F1-F9). We'll look at them in more detail later. At the bottom of the screen is a picture of the unit (a warrior in this case), the commands that I can issue in the middle, and the minimap and some other command buttons in the bottom right. The score is also displayed in the corner at all times (although you can turn it off if desired). As far as looking at the starting position, I seem to have drawn a resource poor starting location here. (Resources are much more important in Civ4 than in Civ3, as you'll see.) There's stone in range but nothing else. Let's move the warrior and see if I can spot anything else in the fog. 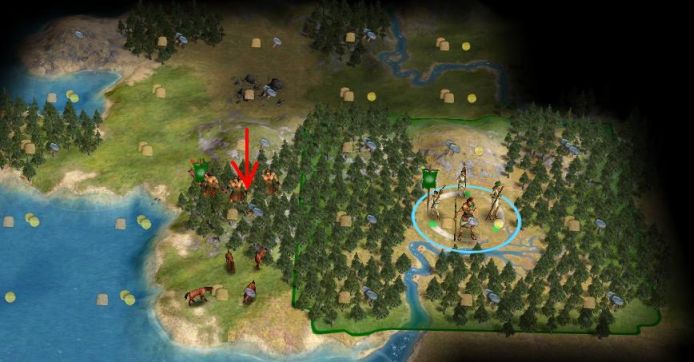 Aha! We have horses present. That makes this a much more viable start, to be sure. (The tile yields - that is, the food/shields/commerce on the map - appear automatically when a settler is selected. And that blue circle is where the game suggests that I settle.) Since I don't want to settle one tile off the coast (this is an even bigger no-no in Civ4 than in Civ3), I move the settler one tile southeast onto the coast and end my turn. That reveals a cow resource right next to where I moved! Our situation is looking up.

The last thing I do on this first turn is to turn on the tile grid, since I've fallen into the habit of using it. That can be done with the hotkey Ctrl-T or by pressing the button I arrowed in the picture below.

In 3950BC, I can start out the history of my civ by founding Mecca: 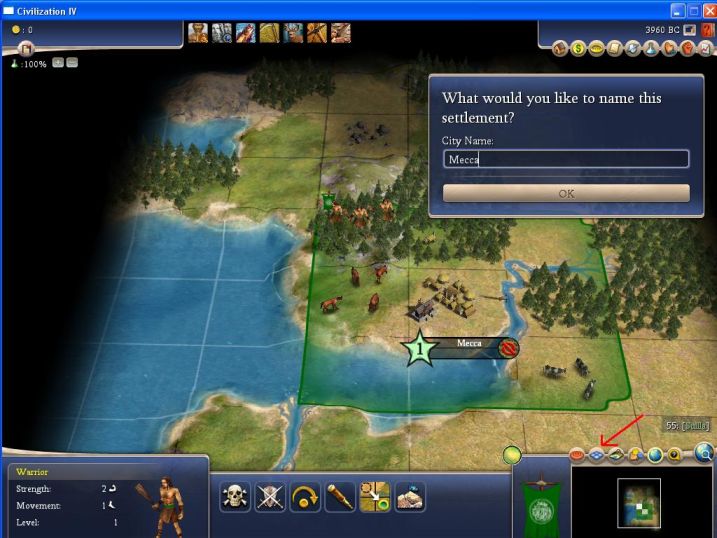 Founding a city has now opened up research (note the tech icons at the top of the screen). Before dealing with that though, let's peek inside Mecca and decide what to build first. 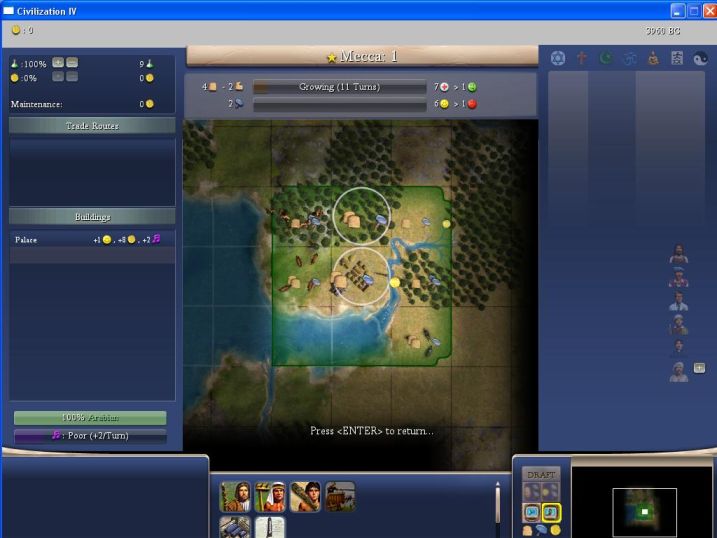 So much for this game being dumbed down, right?

I won't go into detail on what everything does here just yet; for now, I tell Mecca to start working on a warrior. Since warriors cost 15 shields and Mecca is producing 2 shields/turn, it will take 8 turns. There's basically nothing else that I can do on the city screen at this point, so I leave it and go back out to the main game screen.

The next thing to do is to pick which technology to research. Looking at the choices above, I can research (in order from left to right), Meditation, Polytheism, Fishing, Agriculture, Hunting, Mining, and Masonry. All of these techs unlock important things, but I want to try and get a religion here first, so I pick Polytheism as my first research choice. If I can be the first one to research this technology, I will found Hinduism in Mecca (which would be very good). 11 turns, so let's cross our fingers and hope for the best. The warrior moves out to go exploring, and with nothing else to do I end my turn.

Well, that takes us through the first two turns of the game. Go on to the next page to see what happens next.