So I find myself in a war that was I wasn't quite expecting, due to the fact that I feel compelled to help out my allies. Well... going to have to play defensively, at least initially. First order of business is to upgrade my sorry defenses and get some modern units in place. I'd also better start researching towards even better military units. Rifling ordered up as the next tech; that will give me a huge advantage over Gandhi's longbows. Going to be training a fair number of units, so I swap civics back to Theocracy for the experience boost. Time to hunker down until I get my hands on rifles.

No attacks come forth from Gandhi on the first few turns of the war; he must not have had any offensive units himself to throw at me. (He would in fact send some units at me later, fortunately after I had more than archers in my cities!) Once I discover Rifling, I begin upgrading some of my old troops into rifles so that they can be useful again. Even the warrior unit that I started the game with can now become useful again! 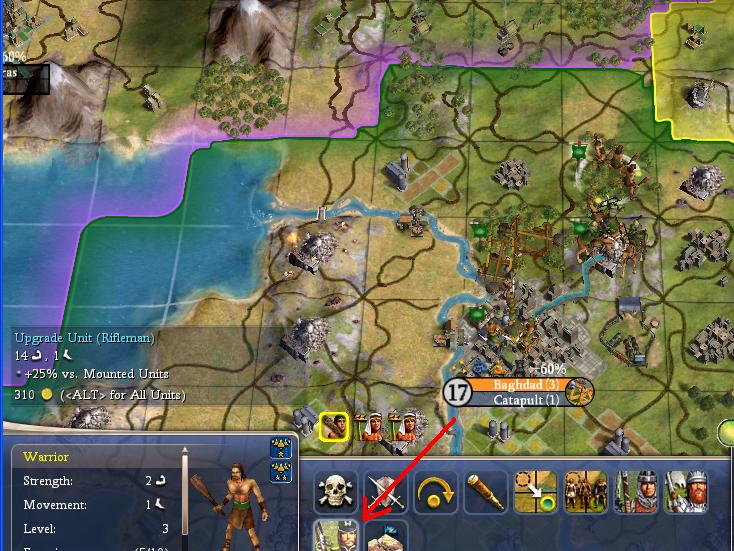 Remember this dude from way back at the beginning of the game? I used him as a scout for ages then brought him back home for safekeeping. You don't just disband a Woodsman II unit when you might be able to get good use out of it later! Now I can turn this warrior into a Rifleman (at a pricey cost, ouch!) but it's a good use of that treasury that I've built up as a result of all those Great Merchants. Archers across Arabia get outfitted with rifles and become suddenly potent defenders.

Wow, talk about things heating up... Caesar up and declares war too! 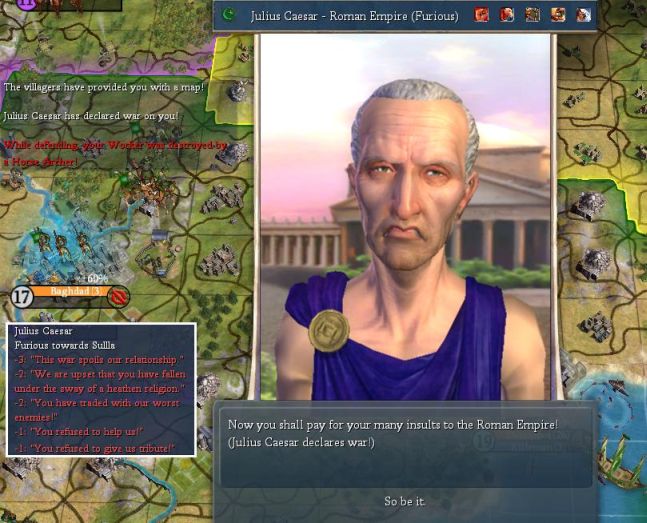 I'm not exactly afraid of Caesar, the weakest civ on the map, but the jerk sucker-punched me by attacking through Egyptian territory and stole one of my workers! Well, there will be payback for this, if not immediately than someday. I'm going to be preoccupied with Gandhi, but let's see what I can arrange with my allies: 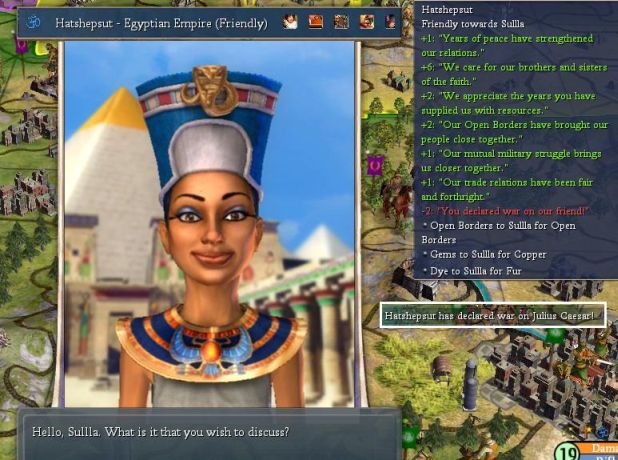 Mansa Musa refuses to declare war on Caesar, but Hatty readily agrees to do so. Even better, I don't even have to pay anything - I just ask her to do so as a friend, and she does!

(Can you imagine a Civ3 AI doing that? I swear, the diplomatic system in this game has been improved soooo much.) Your friends really take care of you in this game, so long as you take care of them too.

As for the unit that treacherously attacked my worker... 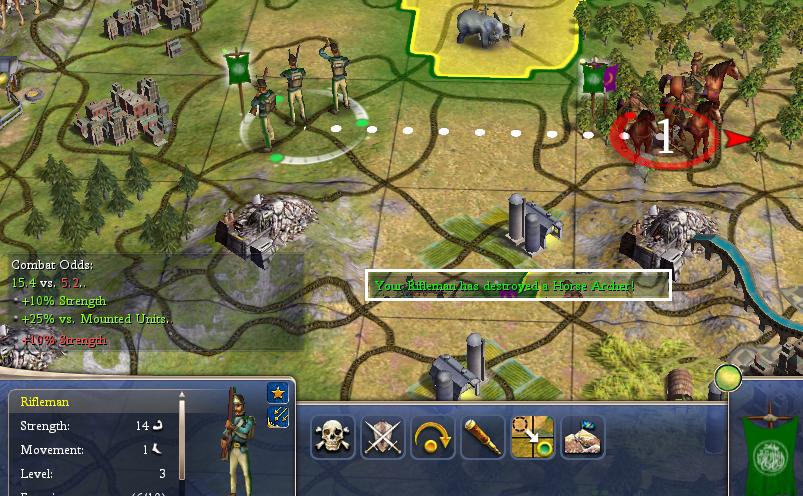 Brave guy, no doubt, but that was a suicide mission all the way. He didn't even scratch my rifleman, heh (I had about 3:1 odds to win every round of combat, and my rifle would do three times as much damage when he hit). I whack another Roman axe in my territory (also on a one-way mission), and any threat from Rome has been removed. Not likely too much else will get through Egypt to reach me...

On the Indian front, I've got a little stack bombarding Bombay, the closest city to my territory: 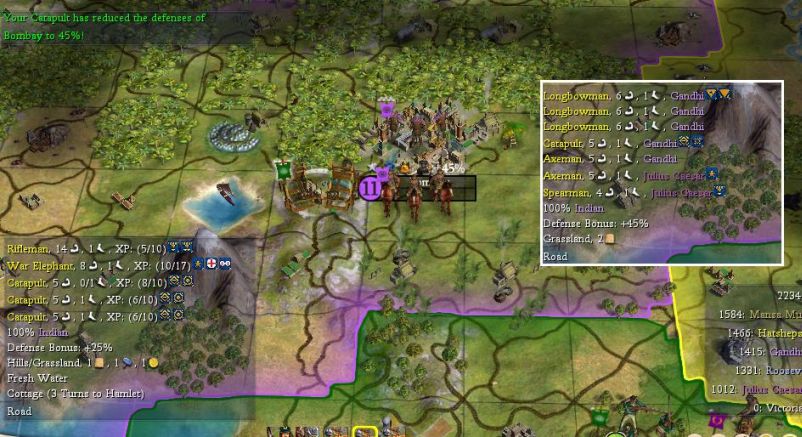 Bombay's defended pretty well, but my cats are bringing down the defenses nicely. Caesar moved out his units on the following turn, making it easier to clean them up. (That was a pretty weedy decision.) But Gandhi pulled a nice move and used his cat to do some collateral damage to my stack! 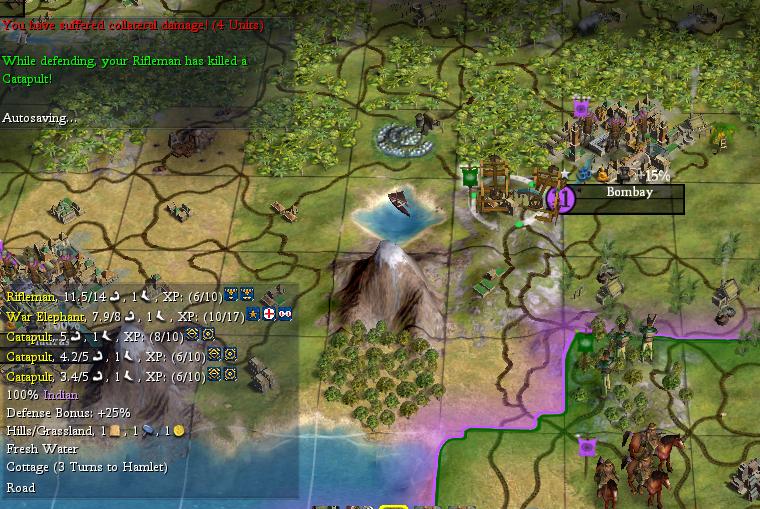 Now unfortunately for Gandhi I have a Medic II elephant in place for just such an eventuality. But as you can see, the AI is pretty good at playing by the same rules as the player - it will even use cats for suicide damage! Now of course it's not as good as a human at fighting, and it never will be, but the AI has made some serious strides from Civ3. Don't think that you can run around with impunity using Conquests armies anymore.

After I manage to bombard the defenses of Bombay down to 0 and get a half dozen rifles outside the city, it falls easily: 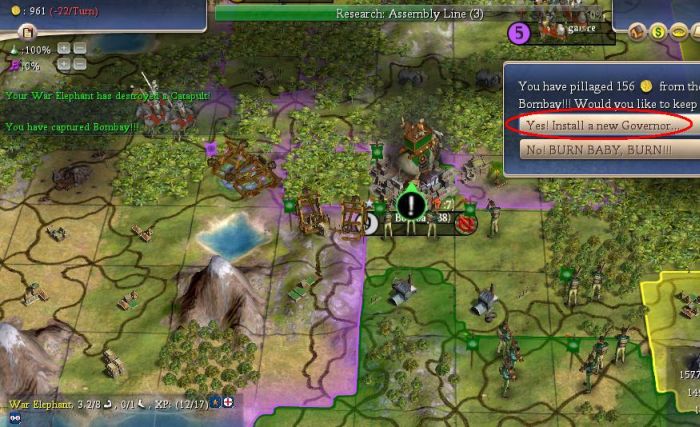 No losses, just took some time and planning. (Bombay is especially useful to have, since the Versailles world wonder is in there. Versailles acts as another Forbidden Palace in reducing maintenance costs, except that only one civ in the world can built it - or capture it, in this case.) Of course - it was rifles against longbows too. As soon as I finish that research on Assembly Line, I'll be able to upgrade those rifles to infantry and kick even more Indian behind. Nice.

Of course, the one problem is that Bombay's borders reset to zero, so that India's culture still controls most of the battlefield. This is one reason why conquest tends to be difficult in Civ4, the persistence of old borders when you capture/raze cities. What I can do, however, is to move in a Great Artist that I've had sitting around and use him in Bombay to instantly end the resistance and push out the cultural borders. The effect is not dramatic initially, since even the culture bomb is not enough to displace the old, built-up Indian borders from Gandhi's remaining cities. But as I capture more cities, the borders in Bombay will spread out and give me control of the battlefield. I'll show you what I mean in a picture a little bit later.

Meanwhile, a fierce struggle has been raging around the Egyptian city of Heliopolis: 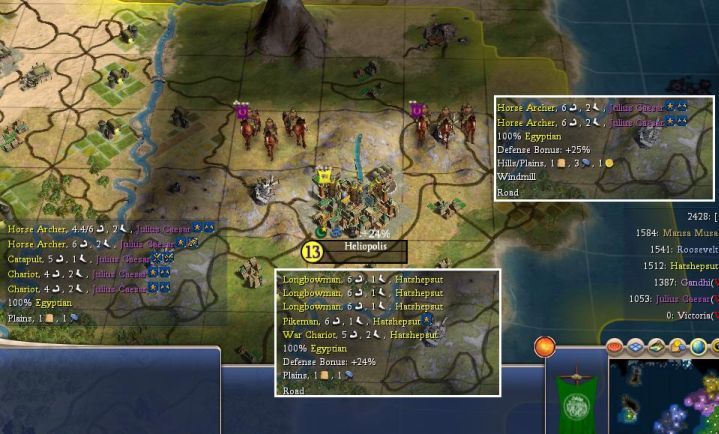 The Romans have been bombarding down the city defense with their cats (yes, the AI is smart enough to do that too), and they may soon launch the general attack. I hope that Hatty will be able to hold on to the city! Not too much I can do about it at the moment, of course. 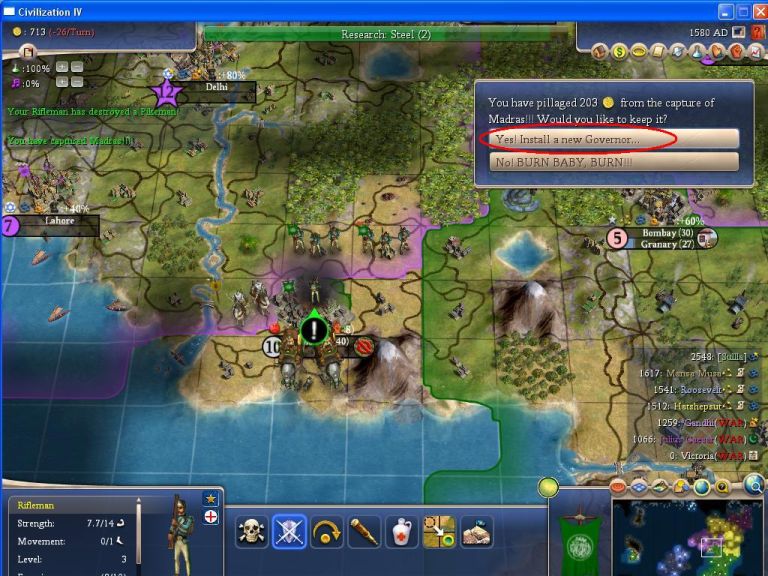 Madras falls in 1580, and I decide to keep it since it's size 10 even though the location leaves a lot to be desired (one thing the AI doesn't consider when founding cities is to put them on the coast - you'll see a ton of AI cities foolishly placed one tile off the sea, like here). I upgrade my rifles to infantry and begin driving for Delhi. Once I get Steel, I can also upgrade my cats to cannon, and do even more damage when bombarding cities. Also notice that Bombay's borders stretch far out to the south (from the culture bomb), but they do NOT make inroads into the established Indian borders to the north. You can't just pop a Great Artist in a captured city and expect to move an old border back a long way. The only place you can really get the borders to move a lot is with new, culturally weak cities - like I did against England earlier.

Oh no, Hatty has lost a city!

When I get a chance, I'll have to send some forces over and help her. The one weakness of the Civ4 AI when it comes to war is capturing cities (it's the one thing that they have a lot of trouble doing), but Soren made gigantic strides in improving that part of the code over the last couple months. Here's an example of an AI civ doing a good job and actually taking a city, which was a rarity for most of our testing. This was an eye opener for me when I saw it, I was not expecting Caesar to get an Egyptian city! (Heliopolis is the Islamic holy city, and Islam is Caesar's state religion right now. I wonder if that's why he went after that city?! Probably just a coincidence though.)

On the following turn Hatty makes peace with Caesar. It looks like he'll be keeping Heliopolis, at least for the short term... I'll see if I can capture the city and gift it back to Hatty at some point. India is occupying the full attention of my civ at the moment, however... Gandhi comes asking for peace, which I reject. What he doesn't realize is that this is a war to the end.

Continued on next page...