I won the short victorious war over the English quite easily, but the Civilization games are more than just war simulations, so now I had the job of building up my economy and incorporating the conquered territories into my Arabian Empire. Since most of the land I conquered was made up of useless junk cities, this could prove to be a bit of a challenge.

First of all, while I've got plenty of money in the bank (over 500 gold now as a result of conquering those cities), I'm now losing it hand over fist at 100% science. Where's it all going? I open up the Financial Advisor screen (F2) for the first time to take a look at what's happening with my money:

The Financial Advisor screen is extremely useful for explaining why it is that you're losing money. Here, we can see that most of my costs are due to civic upkeep and city maintenance. Also notice that you can get mouse-over help for each and every one of these numbers for more info (as I've demonstrated with the maintenance costs in the picture). Now there's not all that much I can do about my civic costs, other than swapping to some cheaper civics (here's where being Organized makes a big difference!) but what I CAN do is to cut back on my city maintenance costs by building some courthouses across Arabia. Once I get 6 courthouses built, I'll be able to build a Forbidden Palace and cut maintenance costs that much more. Courthouses are dialed up in many cities across my territory. I'll also be getting access to markets/grocers/banks soon too, and those will increase the wealth coming in from my Hindu shrine in Mecca.

While we're on the subject of wealth, my Great Merchant has made his way to Timbuktu and is ready to conduct a Trade Mission there: 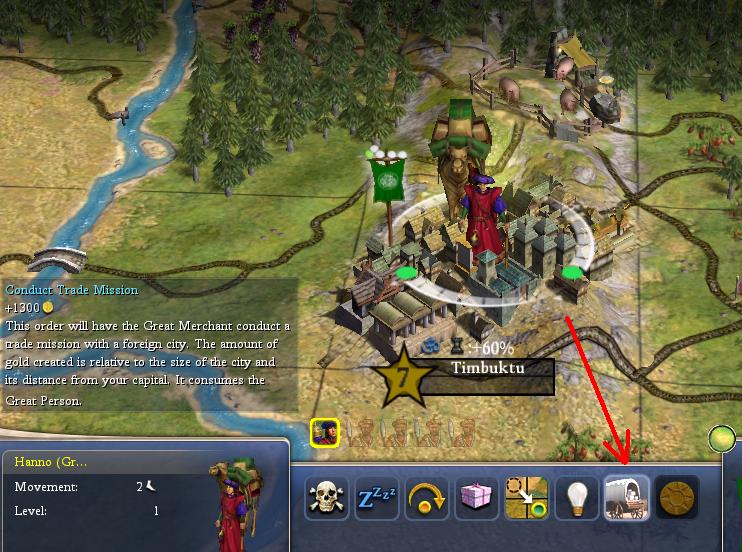 As the description says, the amount of money is determined by the size of the city and the distance from your own palace. Conducting a Trade Mission here will grant me 1300 gold, which is pretty good! I've seen even higher amounts on larger maps; on a Large map game on Epic speed, I was able to get over 4000g once from a trade mission (the gold amount scales by game speed too). Still, this is quite a nice boost and will let me run 100% research for ages and ages, even if I don't do anything to fix my finances. I take the gold boost. Now if I can just get a Scientist, I'll have managed to show you what every Great Person does in Civ4!

Several turns of inactivity follow, the only important items being the completion of a couple wonders by the AI civs (they're no slackers even here on Noble!) At least two wonders were rushed by the AI using Great Engineers; yes, they do know how to use the Great People and will make use of them. No Civ3 Conquests broken armies here. 780AD sees the completion of research on Civil Service, a critical tech that opens up several important things. First of all, it allows for the construction of Macemen (if you also have the tech Machinery and either copper or iron). Since I'm not intending to fight at the moment, that's not all that important. It also allows workers to build farms NOT immediately next to fresh water though, and that's going to be a big help for a lot of the cities in my relatively dry start here. Workers begin spreading irrigation immediately.

Finally, it also opens up the Bureaucracy civic, one of my favorites. Since it's time for another civic swap, let's look at the Civics screen again: 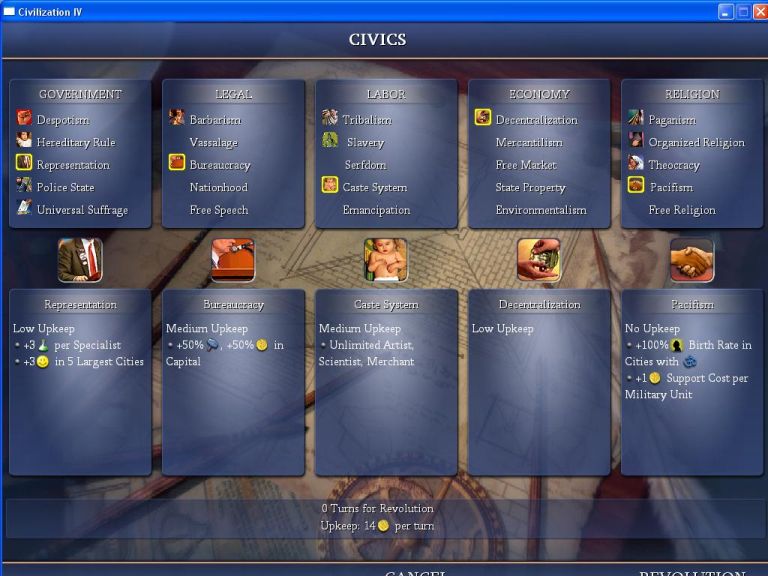 Bureaucracy increases the shield and commerce output of the capital city, which will be a big help as I now launch back into wonder-building mode at Mecca. Also note that I'm swapping to Pacifism in the religious column; this civic will increase my generation of great people by ANOTHER 100%, for a total of +250% overall in cities with my state religion. These powers come with a cost though, as Pacifism also causes you to pay extra money for all military units (makes sense). But I can probably afford to run a small military for a while here, and I'm about to set up a monster city for Great Person production at London shortly (you've got to see this). Short term, I'll be paying more money, but in the long term I should come out ahead.

A couple turns later, Caesar presents me with a demand: 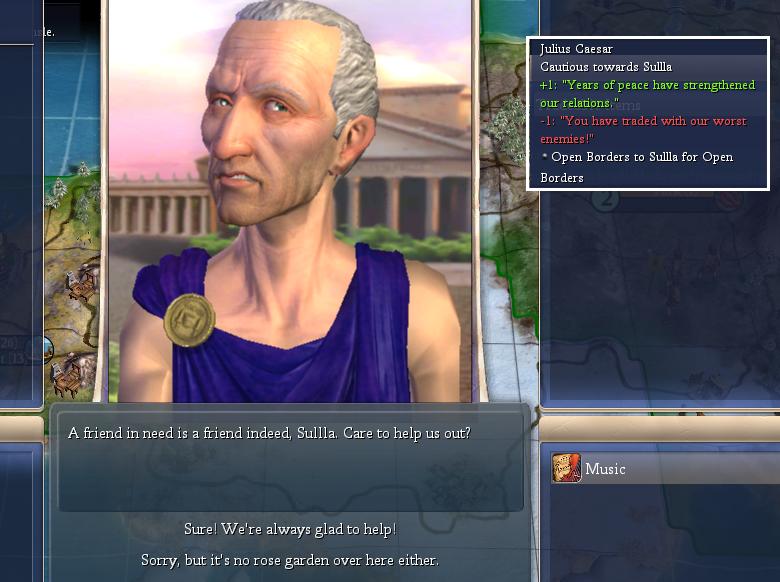 I can go two ways with this. I can aid him and try to cultivate Caesar as another ally, or I can reject the demand and keep him from getting Music at the cost of potentially isolating the Romans. Since Rome is a weak nation and far away from me, I choose to reject the demand. Caesar is already mad at me, you can see, because I have been trading with Mansa Musa (his enemy). Just remember this for the future if I get into a war with Rome - I had the chance to get him on my side, BUT that would have necessitating irritating Mansa Musa. You can't be friends with everyone in Civ4, but the friends you DO make will generally stick with you. The system's not perfect, but it's a lot better than the previous Civ games.

And sure enough, just a few turns later, here comes the proof of our lowered relations: Caesar cancels Open Borders with me. 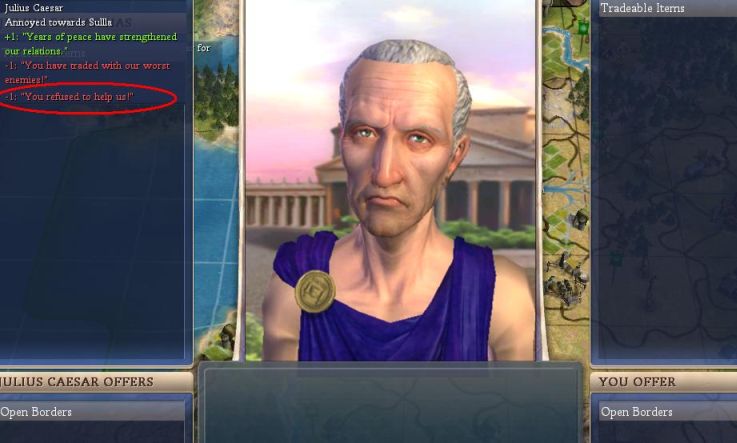 No surprise there, it's a direct result of failing to help him. Don't let it be said that your decisions have no effect on diplomacy!

While there's nothing much going on, let me show you what happens to cities when they become unhealthy. I already pointed out the effects of unhappiness earlier, so here's the unhealthy equivalent: 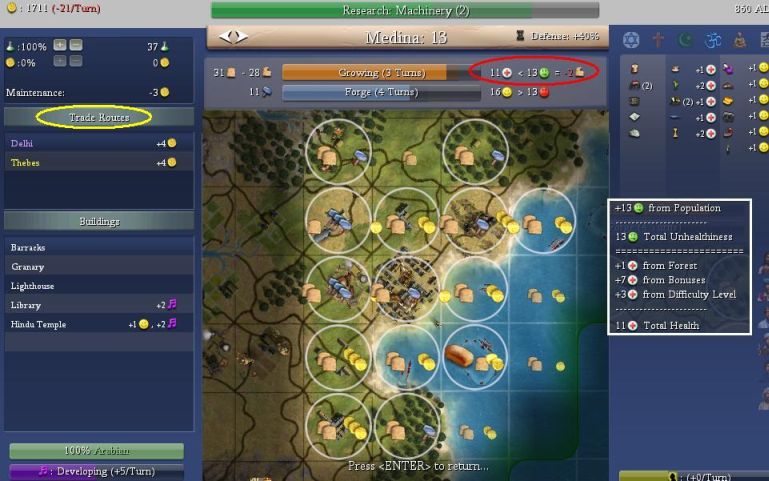 Basically, for every extra point of unhealthiness that exceeds health, the city requires an extra point of food to support each turn. Since I have two more points of unheathiness than health here, Medina requires two extra points of food each turn. (In this situation, it should have a +5 food/turn surplus, and instead only has a 3 food/turn surplus.) While it's almost never a good idea to add extra population that exceeds the happiness limit, it's not a big deal to have unhealthy cities - as long as you have enough food, that is. I routinely have many cities that go into unhealthiness. You can also get mouseover help explaining where the unhealthiness comes from (entirely from population here).

Oh, and since I've discovered the tech Currency, my cities now have two trade routes instead of one. Medina is getting 8 commerce/turn from them, so it's already pretty significant. I can increase that even more by building a harbor (increases income from trade routes), which I intend to do soon.

I get another Great Merchant in Damascus a couple turns later; let me show you another function of Great People, their ability to discover technologies: 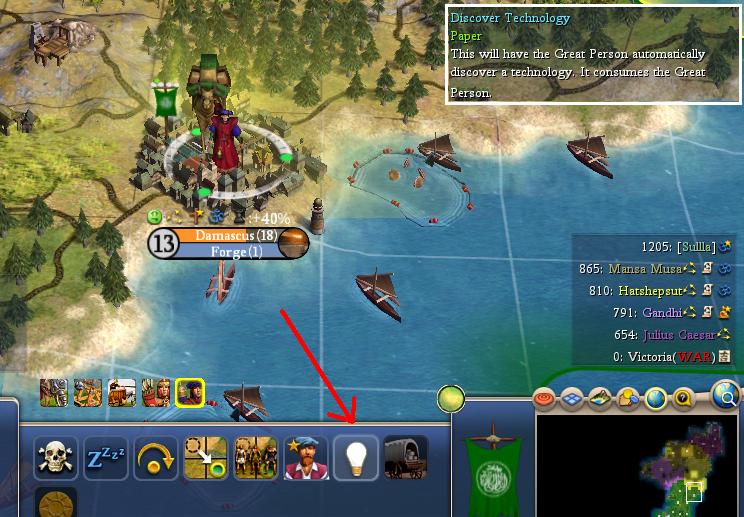 All Great People can be used to discover technologies (or, for the late-game technologies, knock out a lot of the beakers towards discovery). The technology discovered will be one that relates in some way to the type of the Great Person; for example, Great Prophets will discover religious techs while Great Scientists will discover ones related to technology. Here, my Great Merchant has the option to get me Paper, which I take. This technology opens up Map Trading, so I do a bit of that and get an updated view of the world.

With the discovery of Optics a few turns later, I can build caravels to go out and explore the world's oceans: 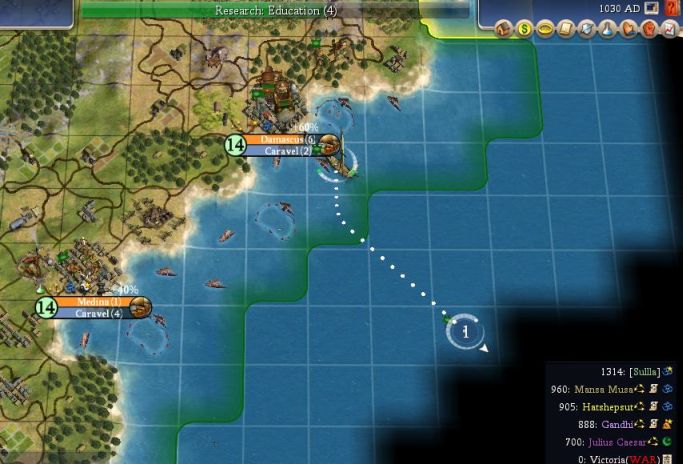 Caravels are the first ships that can travel onto ocean tiles (galleys can't do it at all, unless they are in your cultural borders. No more suicide galleys, which you have to admit were a pretty gamey and unrealistic concept.) The Age of Sail is underway!

Hopefully I'll find something interesting before long; don't forget there's still one more civ out there in the fog to be found! Also note that Caesar has swapped his state religion to Islam, which Hatty founded. Relations have definitely cooled with the Romans.

I get another Great Person in Mecca (no surprise, with all the wonders in that city), and the type? Another Great Merchant!

Well, let me show you ANOTHER way you can use Great People, by merging them into cities as "Super Specialists": 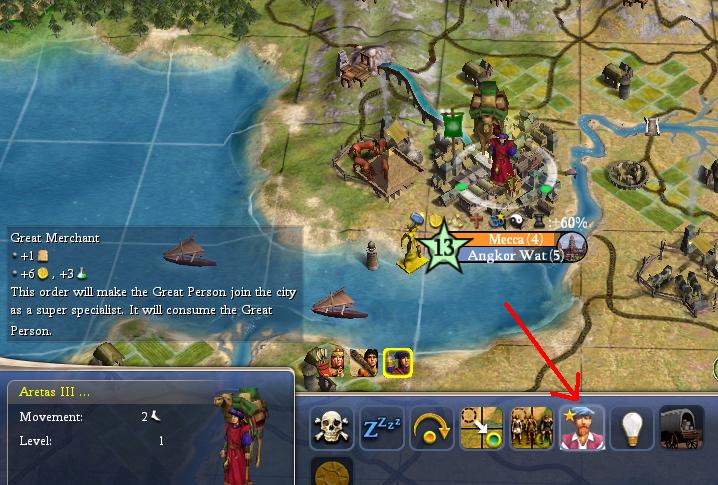 Selecting this option will merge the Great Person into the city, permanently providing a boost on each turn of the game. What you get is a little different for each Great Person; the Great Merchant adds 1 food and 6 gold, as you can see (the 3 beakers again comes from the Representation civic that I'm running). Since Great Merchants actually add FOOD as super specialists, they are one of the most useful ones to do this with. And that gold boost is multiplicative with markets and banks too. So not a bad option here at all to create the super specialist. (As for the wonder, Angkor Wat will make my Priest specialists more powerful by adding an additional shield to their output; usually, Priest specialists provide 1 shield and 1 commerce, while after building this wonder they produce 2 shields and 1 commerce, making them better than Engineer specialists!)

As the turns fly by without anything too crazy happening, the one significant thing is that Mansa Musa has swapped to Buddhism. That's not what I want, so I start flooding him with missionaries (takes a long while for them to get up there). Once I convert all his cities, he should swap back again. And to be honest, I need the money from shrine income as well; I've been losing money at 100% research for a long time now. I discover Education and enter the Renaissance era without issue (cities looking cooler with the era change though).

With lots of turns going by in a hurry, let me show you how things stand in 1100AD: 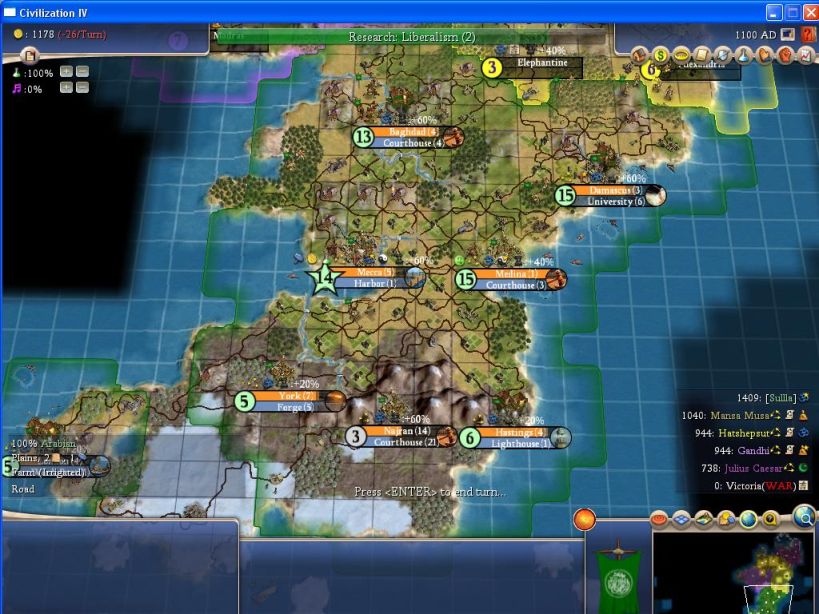 Mostly building, not too much going on. These be quiet years in Arabia.

Continued on next page...