I spent the next couple turns building some archers for defense and prepping the location of my culture bomb city. Researching Construction, which will open up two military units (elephants and catapults), both of which I plan to use. While I'm waiting, one of my scouting units comes across a barb city in the west. Take a look:

Yep, barbs can found cities in this game, and capture them too. No one has been able to capture Zapotec yet, and with only one chariot here I won't be able to get it either. I'll keep my chariot in there area though, in case I can swoop in and get it on a failed attempt from Gandhi. The barb units that the city will produce can probably also promote my unit too.

Najran gets founded in 75BC as my culture bomb city. I have it start on walls, because I expect it to be the target of English aggression, sooner rather than later. It's a total junk city, nothing but ice and tundra... but with luck, it will let me flip some English cities. But before I can do anything else there, Mansa Musa comes proposing a deal: 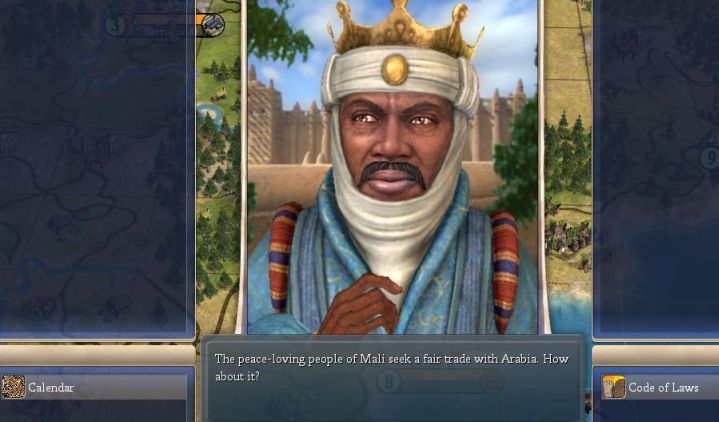 This is a very fair deal; both techs cost about the same amount, and ordinarily I would accept it. However, Calendar is the tech that obsoletes Stonehenge, and since I have no resouces that are connected by Calendar (silks, spices, etc.) there's no reason to accept it. I decline. Just wanted to demonstrate again that the Civ4 AIs will come proposing trades, and they are not the idiotic ones that we're used to from prior Civ games (most of the time, that is).

25BC: Discover Construction, most of my cities swap to building either elephants or catapults. The only reason I can build elephants is because I have ivory - that was fortunate. Homer, a Great Artist, is born in Damascus, and I start moving him towards Najran. Damascus is reconfigured to produce a Great Merchant next (that will help keep me in the black and also so I can show you what that particular Great Person does). Homer is in position in 25AD, and it's time to demonstrate the infamous culture bomb. 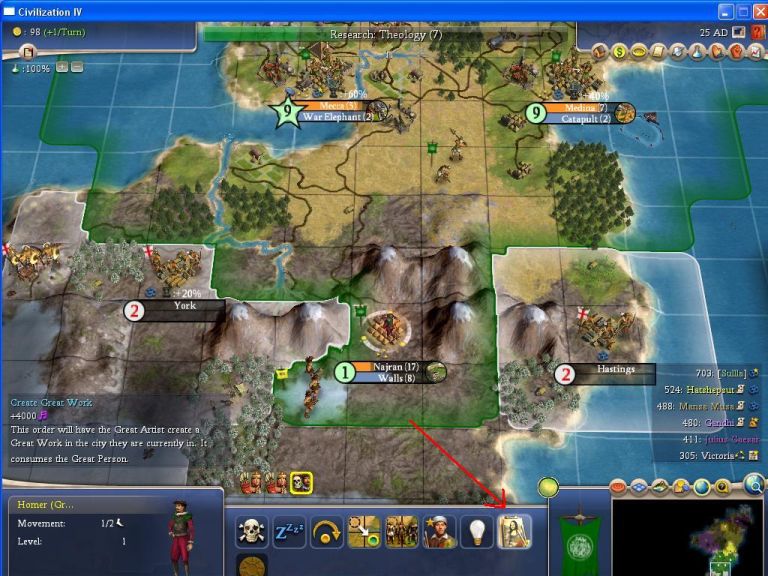 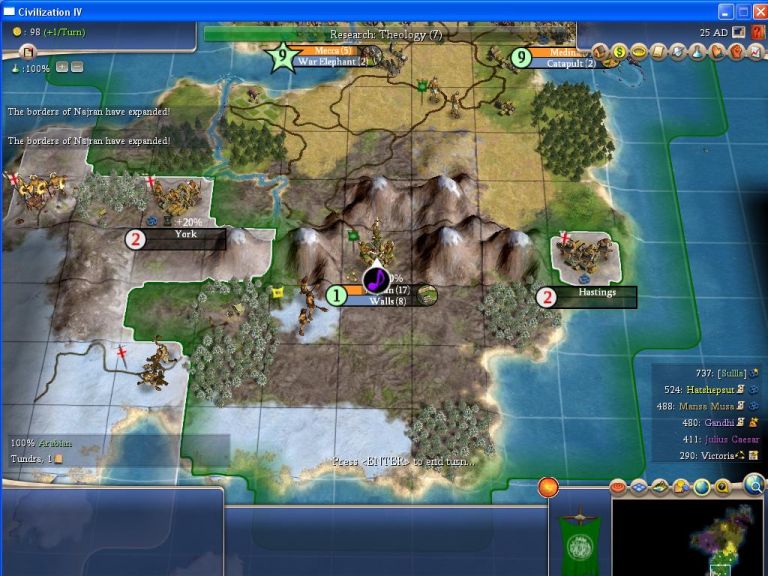 Hastings is toast. It will flip to me in a matter of turns, probably less than 10. York is in deep trouble too; I don't know if it will be able to hold out. Getting that city would be key, because there's a source of copper there and I don't have any myself. I don't plan to leave anything to chance though, because I'm building up an army of elephants + cats to go and destroy England in the near future. The Great Artist has simply given me control of the battlefield.

Now, lest you say "OMG, this is so overpowered, how can this be in the game!" let me reassure you that we spent an ENORMOUS amount of time testing the culture bomb and making sure that it was in balance. The Great Work is useful for flipping new, culture-poor cities like Hastings. You may also be able to flip weak cities like York which have little culture built up. The culture bomb does NOT flip long-established, core cities. If you use it on a mature border, it's unlikely to move much at all. So before anyone goes crying wolf about a broken feature, try playing with it some and see for yourself. It IS very useful for flipping weak junk cities though, as I'm doing here.

Sure enough, I get my first revolt in Hastings in 150AD. Now a revolt does not equal a flip; that means that the city shuts down for a few turns due to rioting, and serves a warning that the city may flip soon. A city can never flip on the first revolt, but has a good chance on the second revolt, and I believe is guaranteed to flip on the third revolt. Since Hastings will never be able to accumulate any culture, it's doomed and will flip shortly. Meanwhile, on the same turn, my workers finish a road that connects me to Egypt, so time to see what we can trade: 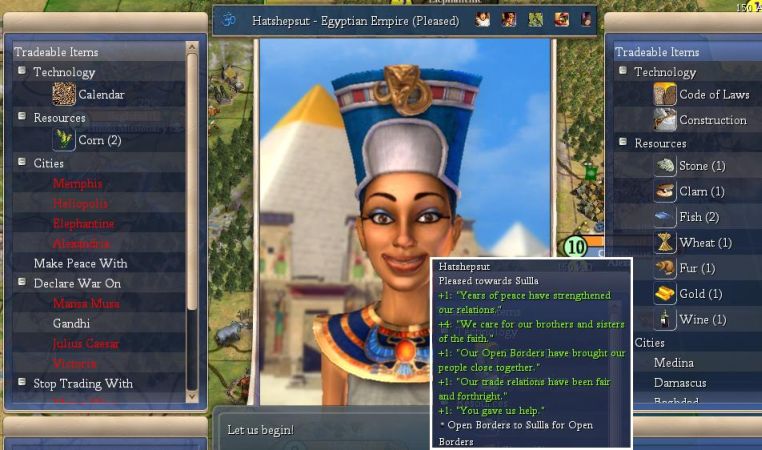 Resource trades are usually done on a one-to-one basis in Civ4, although the AI is much less willing to trade you strategic resources than health or happiness ones. Ordinarily, I would swap my fishes for Egypt's corn, to both of our benefits. However, since I just stole a corn away from England and am hooking it up at the moment, I don't need her corn and so I don't make a deal. I'll have to come back to Hatty later when she hooks up her dyes. Also note how good our relations are: up to +8, and still climbing. I have one strong friend!

On the next turn I discover Theology and found Christianity. 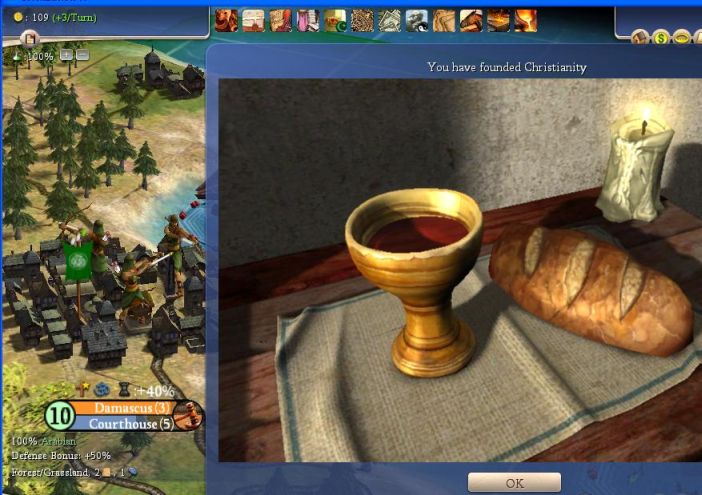 I really wasn't even trying to get this religion, as I was aiming for the Theocracy civic that accompanies Theology, but this will give me a chance to demonstrate the role of a minority religion. If I get another Great Prophet, I can spread Christianity around as well and make money off of it. The fact that Damascus is the Christian Holy City (one of your cities gets picked at random) only makes things that much better - that's the city I would have picked if I had a choice! I send the free Christian missionary (the later religions come with 1 free missionary, to help them get started) to Mecca and add Christianity to that city as well.

Now, let's look at another civic swap to Theocracy: 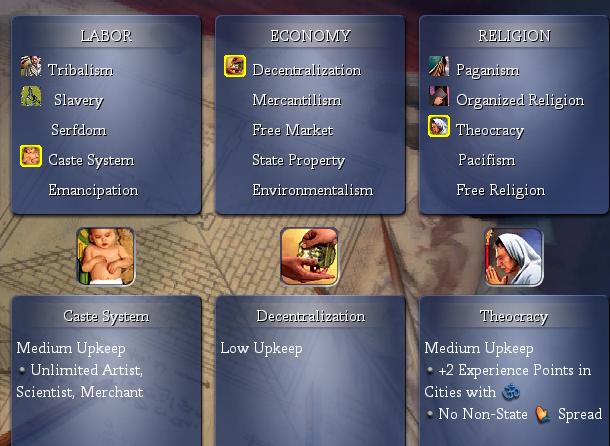 Theocracy is a civic that grants units built in cities with your state religion 2XP. Since barracks grant your units 4XP (that's what they do), a unit built in a city with barracks plus Theocracy will start with 6XP - enough for 2 promotions, since the first two promotions come at 2XP and 5XP. Those 2XP are thus quite valuable, as it gets your units an extra promotion! As I'm preparing to fight now, I'm going to make use of the extra promotion. Now of course it does also have a drawback - no spreading of non-state religion allowed. (I waited a turn to swap civics so my free Christian missionary could convert Mecca first.) That could also be viewed as a plus if you don't want an AI religion spreading into your territory, but it's usually a negative. And I also lost the benefits of running Organized Religion, so my cities no longer get the building boost and they'll need Monasteries to build missionaries. But as far as a wartime civic goes, Theocracy is a pretty good deal.

For example, look at one of the elephants I've just produced using the new civic: 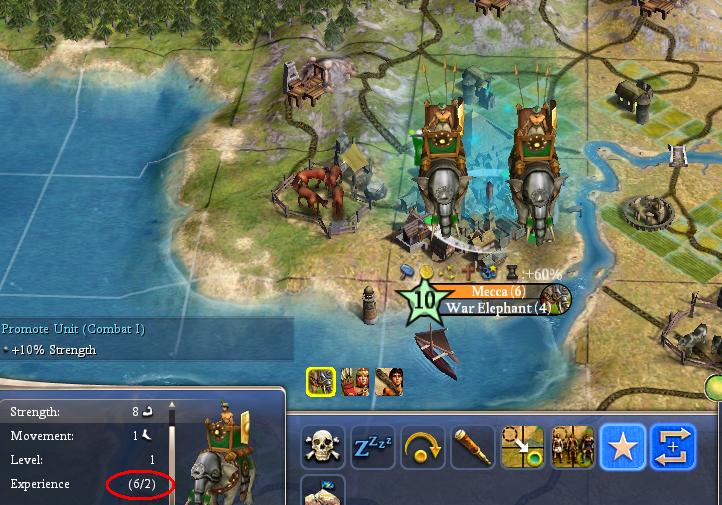 The unit starts with 6XP just as I said, and so I'll get to pick 2 promotions. I generally like going with Combat I and Combat II with the elephants, although it's good to mix in some other promotions too, like Shock (+25% against Melee units) and Medic I (+10% healing for all units on same tile). My cats are generally going with Bombard (increased collateral damage) and Accuracy (reduce city defenses faster) promotions.

Between turns, Mansa Musa comes up with a nice resource deal that I accept: 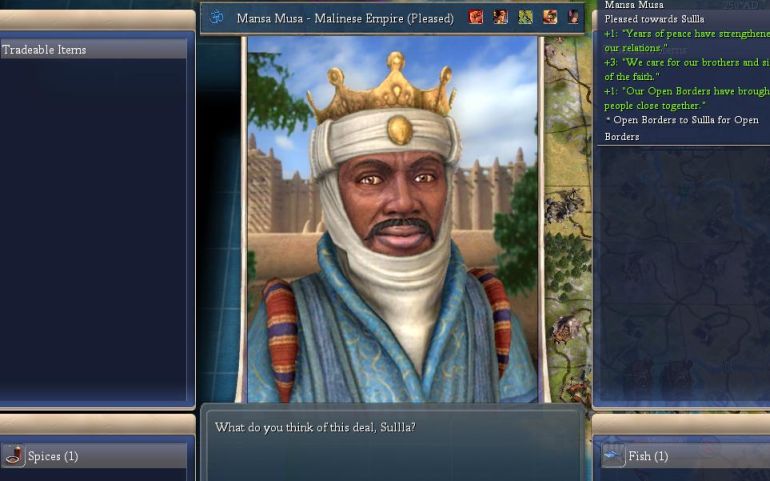 Fishes for spices, a good deal for both of us. It will also boost relations further; my fellow Hindu buddy to the north looks like another long-term ally.

No surprise, a couple turns later Hastings flips to me: 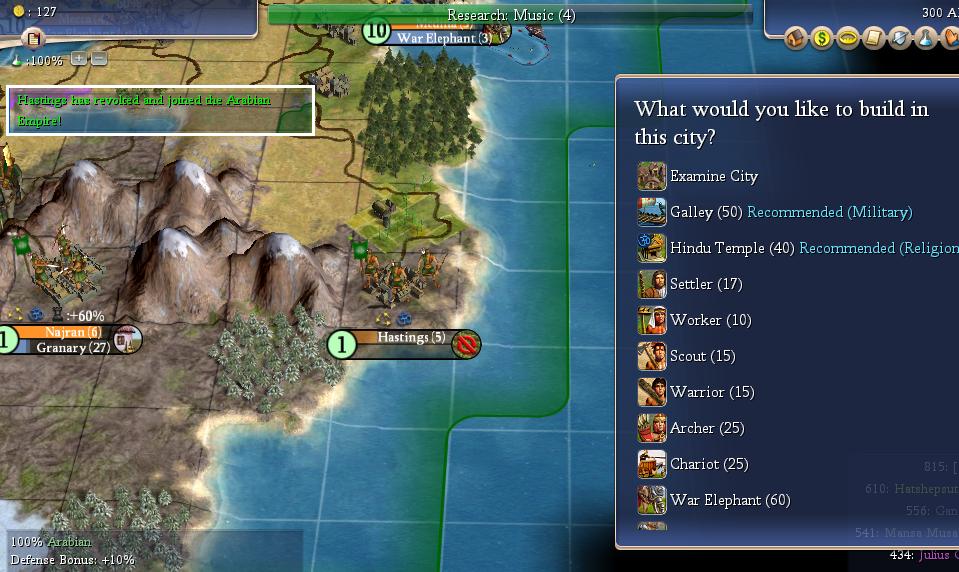 It was wholly surrounded by my culture, so no surprise there. By the way, unlike in Civ3, units are not destroyed in a culture flip... the English units in Hastings were teleported back to their own borders. No more random disappearing of gigantic armies. Culture flips are also much less random; anyone could see the Hastings flip coming a mile away, for example. Now that the eastern part of my southern border has been secured, I can get this war started shortly. Just need a couple more elephants...

On the following turn, I get a Great Engineer in Mecca! 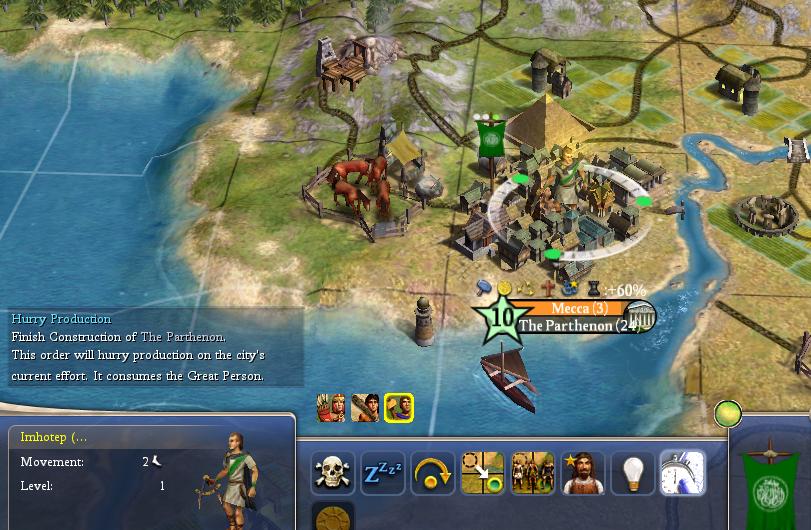 Ha, got him due to having built the Pyramids. The odds of getting a Great Engineer in Mecca were about 30%, with about 70% chance for a Great Prophet (I was going to get SOME kind of Great Person, but most of my Great Person points had been Prophet ones). Now I can show you what the main function of a Great Engineer is: they can finish the production of almost anything in one turn (some late-game expensive wonders won't be completed fully, but a Great Engineer will add a significant amount of shields). And in this situation, what I want to do is rush a wonder! 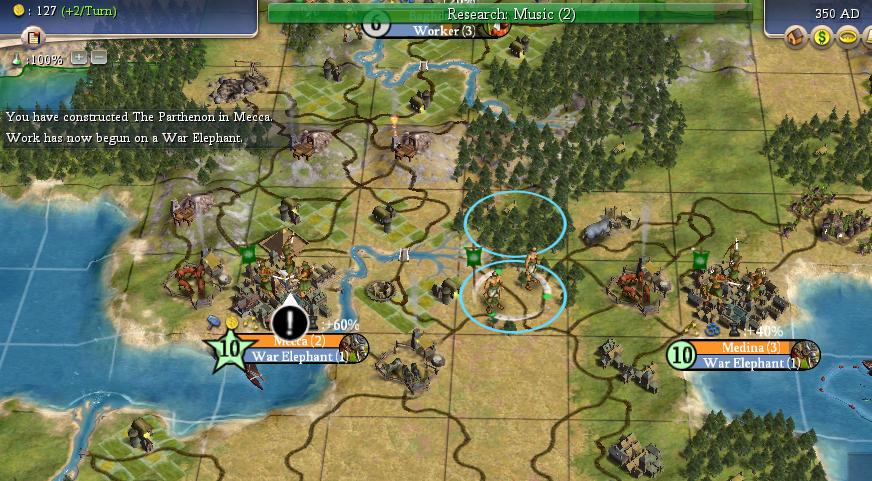 The Parthenon will only further my Great Person addiction, as it increases Great Person points by 50% in all cities. That means I now get +150% total, after factoring in the Philosophical bonus. Uh oh.

Also, as soon as I get those War Elephants done in Mecca and Medina, I'm going to war with Victoria. Time to remove the Confucian scum from the face of the map!

One last little story to report before going to war: I got a free Great Artist for being the first to discover the tech Music (as with the tech "Philosophy" in the Conquests version of Civ3, discovering certain techs first confers certain rewards). I'm going to use him in Baghdad to show the effects of using a culture bomb on a more mature border, and also hopefully to steal iron from the Egyptians. 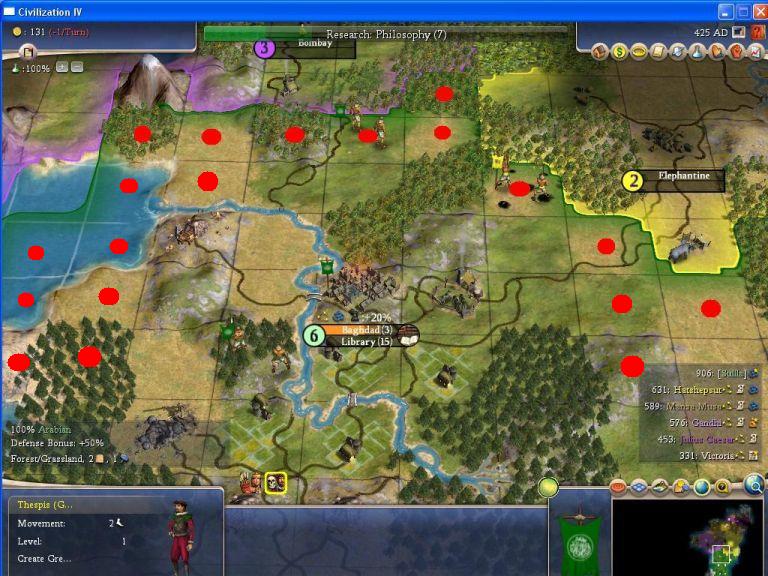 I marked the tiles gained from the culture bomb with a red dot. Notice that although I certainly grabbed an extra line of tiles (and especially the iron!), Elephantine is not in any danger of flipping. This is the more common result of using a Great Work; it's actually pretty tough to flip cities in Civ4. Don't think that the culture bomb is completely out of balance, because we worked pretty hard to make sure that it wasn't.

Continued on the next page...