Several more uneventful building turns follow. My cities are locked on infrastructure at the moment, although when they finish I'm going to start building up my military a bit... especially do something about that warrior guarding my capital! As soon as I discover Writing, Gandhi comes calling and asks to establish Open Borders:

Open Borders will allow our units to enter each other's territory and allow trade routes to extend between my civ and Gandhi's. Now we can't have any trading routes at the moment because our civs aren't connected, but they will be eventually. Since there's really nothing to gain by refusing, I go ahead and agree to Gandhi's offer. It won't really have that much of an effect at this point. On the other hand, I go ahead and sign Vicky and Hatty to Open Borders agreements in a real attempt to cultivate relations with them. I can already trade with Vicky, and I want to send my Hindu missionaries into Egypt soon to convert her to the true faith; Medina is already at work on a Hindu missionary as I speak.

Argh, bad news strikes in 825BC as someone else completes the Oracle just 2 turns before I do! 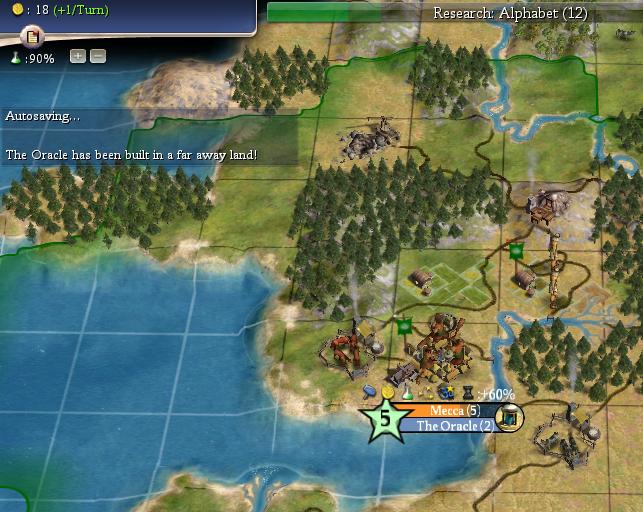 Not a total disaster, but the Oracle would have helped out a lot. A whole lot. Tons of Great Person points that Mecca would have gotten for free there. Ah well, not the end of the world. Mecca swaps to an Archer for defense, then will go back onto settler building. Fortunately, the following turn the shields I had put into the Oracle get converted into 134 gold. A decent consolation prize, although I would have rather had the wonder...

Now that I've built my first one, time to say a word about cottages: 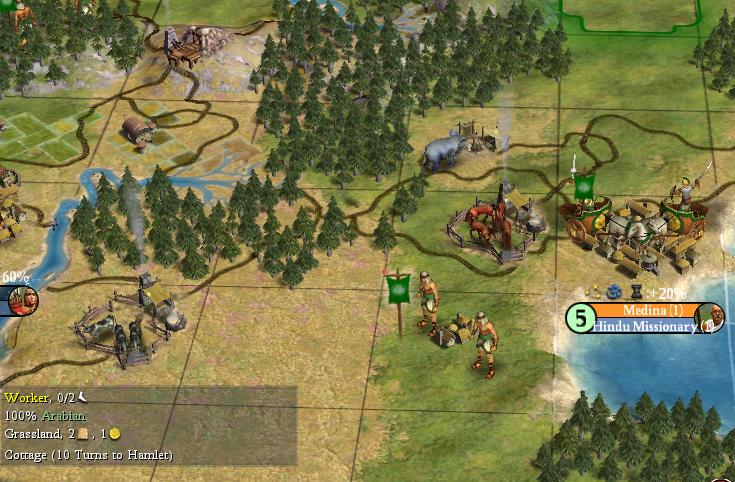 Cottages are tile improvements that add commerce to a tile. Roads do NOT add commerce anymore, they only increase movement of units. Initially, cottages only add one commerce to a tile; in order to become more valuable, a city must "work" the tile with the cottage by selecting it on the city screen. After 10 turns of being selected, a cottage turns into a hamlet (which adds 2 commerce to the tile), then eventually it can grow to a village and then a town. Towns add 4 commerce to a tile, and can get some extra effects from certain civics, so they are quite powerful - but they take a long time to develop. I won't be building any cottages at Mecca because it's a food-poor city and I'm gearing it towards production. Medina and Damascus have enough food to support several cottages and become commerce powerhouses. You'll see with time.

On the next turn, I produce a Hindu missionary and start moving him towards Egypt's borders, temporarily leaving Damascus unguarded to ensure he gets there safely (again, don't try this in MP kids!) While he's moving in that direction, a barb warrior wanders into my territory. This will give me a good chance to show the combat odds that you can display in Civ4: 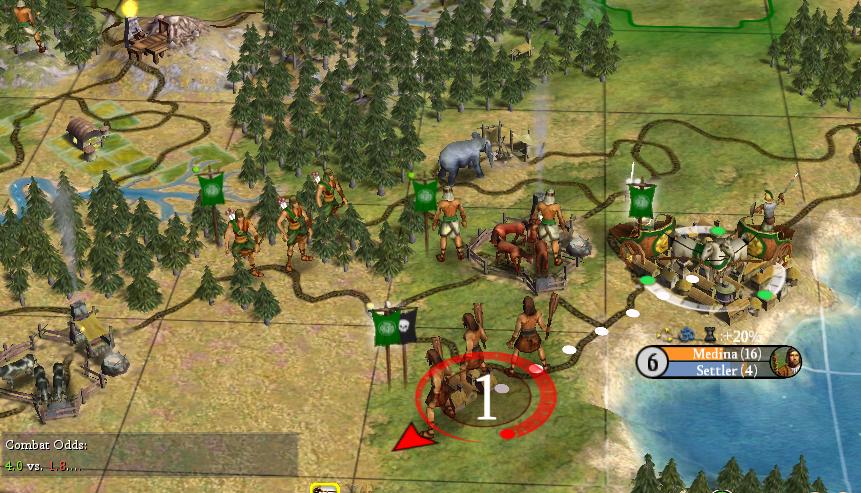 You can see these odds by holding down the right mouse button and moving onto an enemy unit, or by using Alt plus the left mouse button (I think). Basically, this shows the combat strength of both units. My chariot has a strength of 4, the barb warrior has a strength of 1.8 (he loses a little strength because my units get a boost when fighting barbs on Noble). This does NOT mean that the odds of me winning are 4 divided by 5.8 - what it means is that my unit is strength 4 and the enemy unit is strength 1.8. My chariot has more than 2:1 odds to win each round of combat, and the chariot will do more than twice as much damage when it hits compared to when the warrior hits. The odds of me winning are more like 98% than 68%; if you're behind by more than 2:1 in the combat odds, there's virtually no chance to win. As for what actually takes place, my chariot is reduced to 1.9 strength, but not surprisingly wins the battle.

On the same turn, my Hindu missionary has made his way to Thebes and gets ready to convert it: 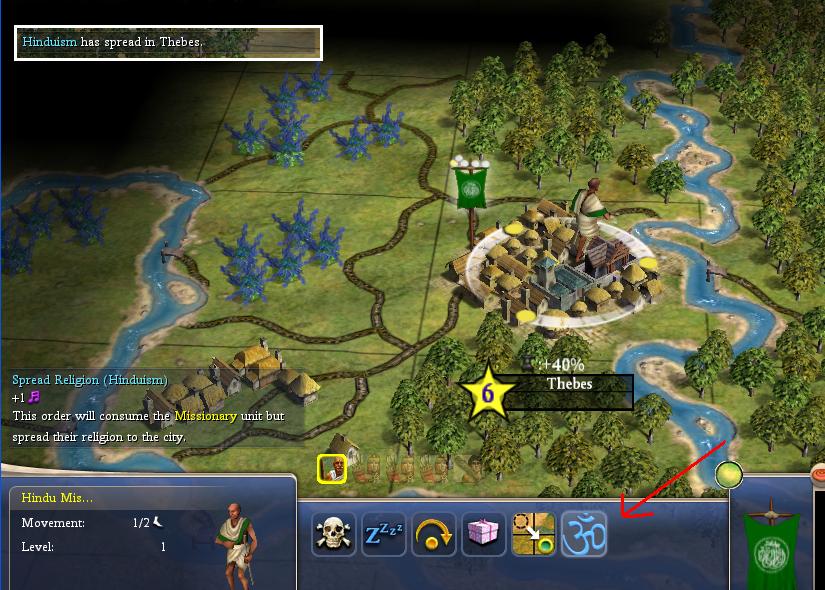 Success! Now there is another convert brought into the Hindu fold.

With luck, Hatty will spread the religion around herself and thus get me even more converts. Judging by her city on the map, I can also see that she has the palace and a barracks in Thebes and nothing else. What you see is what you get, in terms of the map.

Several turns go by without anything too important happening. Medina produced another settler and sends him north to go grab the gold resource in that region. Mecca starts work on the Pyramids, which I will have a very strong chance to get due to possessing stone (double production speed again).

Things start happening again in 525BC when I discover Alphabet after a long research time. This is the tech that enables tech trading (it also caused me to enter the Classical era), so let's see what deals are possible. This will be a good chance to check out the Foreign Advisor screen (F4 hotkey). 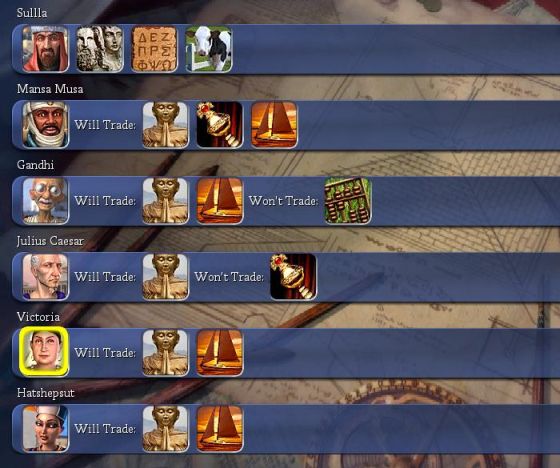 There are actually several different tabs on the Foreign Advisor screen, one showing the relations matrix (which can hold as many as 17 civs), another for resources, and one for current deals as well. But the one that I've found to be most useful is the Technology screen. It shows very clearly what techs you possess, what techs the AI civs have, and whether they would be willing to trade their techs or not (yes, there are some techs that they will simply refuse to trade no matter what - like if they're building a wonder they won't trade you the tech for it). You can click on each leader to see what the situation is vis-a-vis each one. Here, Victoria has Meditation and Sailing that I lack, both of which she would be willing to trade, while I am up Polytheism, Alphabet, and Animal Husbandry on her. The tech I'm most interested in getting is Monarchy from Mansa Musa, so let's dial him up and see if a deal is possible. 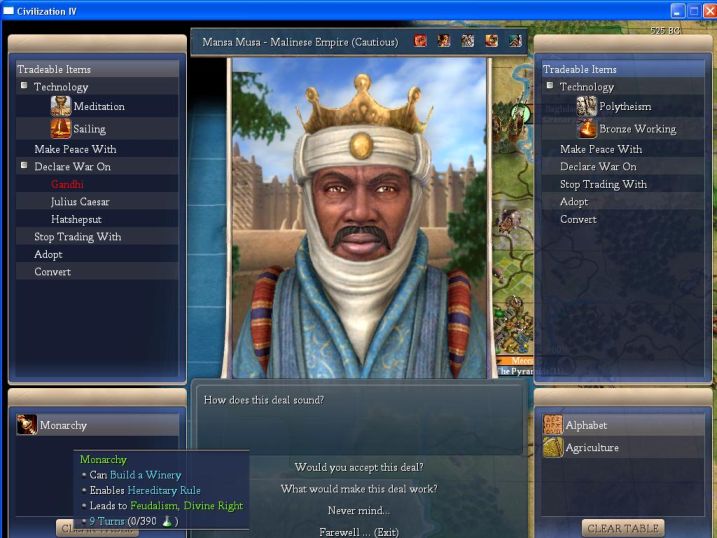 I work him up to this deal, which he accepts. Notice that by mousing over the techs you can see exactly how expensive they are (as I'm doing with Monarchy) and thus avoid getting ripped off by the AI. I still had to pay him more than he gave me, but it was a good trade for both of us. Monarchy and Alphabet are about the same cost in beakers. Now I can hook up my wines next to Medina! (Monarchy enables wineries.) Also note that it's possible to get the AIs to declare war on other AIs without going to war yourself, although expect to pay an arm and a leg to get them to do that. And because Mansa Musa has good relations with Gandhi, he simply won't fight India no matter what I say. That's why that option is redded out.

Because Vicky is backwards technologically, I cut her a deal to pick up Sailing and Meditation. That also improves her relations with me. So while tech trading is still possible in Civ4, the focus is much more on self-research and exchanging techs - rather than running 0% science the whole game and buying everything from the AI. Those days are long gone. You can still pay money for techs, but it's a lot more expensive to buy techs than research them. A lot more. Not to mention you can't even pay for things using gold in diplomacy until researching Currency, while is 1/3 of the way through the tech tree!

On the following turn I get my first Great Person, a Great Prophet in Mecca: 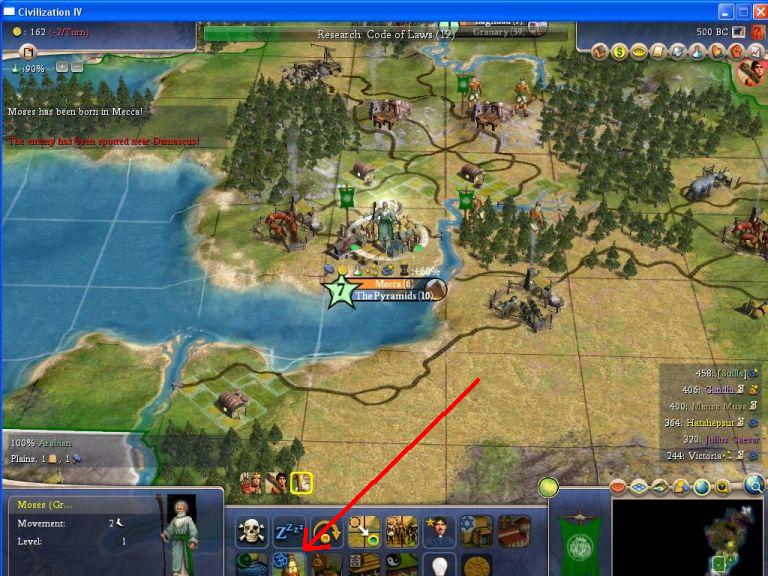 It should be no mystery where this guy came from, as Stonehenge got me the Great Person points to produce him (as I explained earlier). Now the question is, what do I use him for? I have several different options; I can use him to discover a tech (Theology in this case), I can save him for a golden age (I would need another non-Prophet Great Person for that though), or I can merge him into a city as a "super-specialist", which is often a good option too. However, in this case I'm going to use my Great Prophet to create the Hindu shrine in Mecca. This will grant me 1 gold/turn for every city in the world with Hinduism in it. If I play my cards right, it will let me run 100% science for basically the whole game! Let's take a look at what happens. 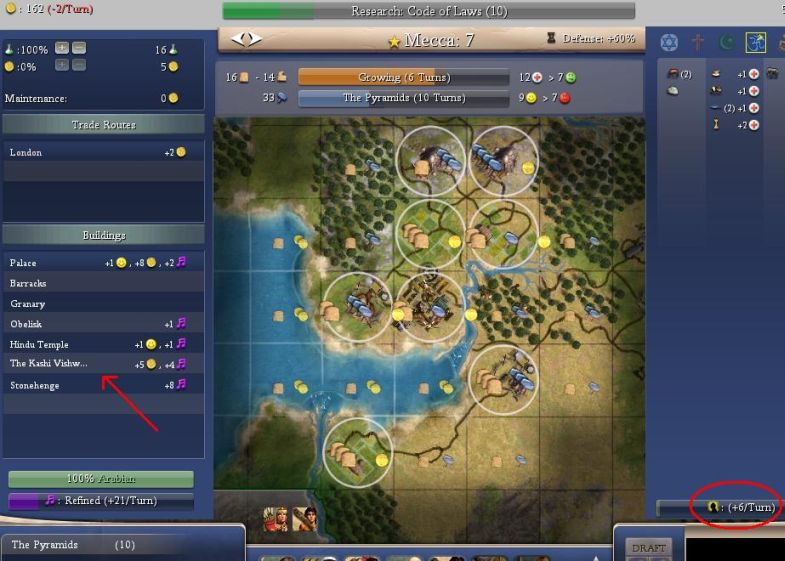 As of now, I'm only getting 5 gold/turn from the shrine, so the effects are not too dramatic. It was enough to bump me up from 90% science back to 100% though. Also note that Mecca is now getting 6 Great Person points each turn instead of 4; it's getting 2 from Stonehenge and 1 from the Hindu shrine, then +100% because Saladin is Philosophical. I'll have to come back to this city again later after Hinduism has spread a bit further to show what a big difference shrine income can make. 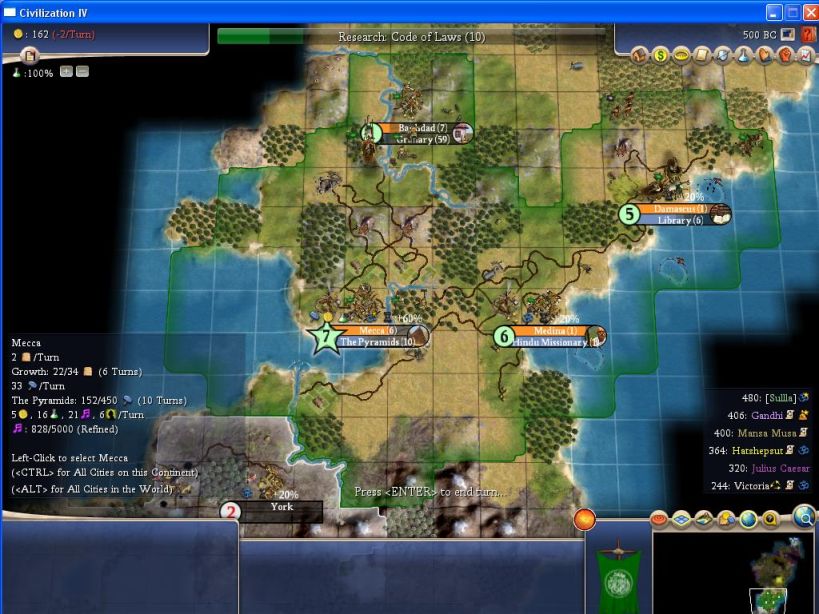 Things are looking good as of 500BC.

Continued on the next page...