I missed several weeks of the druid team variant in August 2007 due to vacationing, and this was unfortunately followed by a terrible September month in which my PC was infected with viruses and spent four full weeks out of commission. As I said on the previous page, I never expected to go a entire month without having a computer at my disposal! That threw all manner of projects out of sorts. Furthermore, once November came around, our weekly Wednesday night sessions began to conflict with basketball games at my university, causing my attendance to become even more spotty.

As a result, my meticulous notes were thrown to the winds, and all I could do was rely on scattered screenshots that I had taken to reconstruct the druid journey. Although that's no excuse for poor storytelling, I did want to explain to the reader some of the personal circumstances that were taking place during this busy period.

The game itself continued to progress very well indeed. While the druid team wasn't the fastest group by any means, for variant characters with major restrictions we continued to kick some serious demon hindquarters. The Outer Steppes were handled without incident. Izual was his usual self:

He *IS* more dangerous now than he used to be, when the fight was just a total joke. The chilling aura definitely puts a crimp in melee builds, so most of the damage here was coming from the mage druids - as usual. With dathon and Namarie missing from this session, T-Hawk's Fissures provided the artillery firepower to get the job done. My werebear's chilled attack is so laughably slow, I didn't do much besides serve as a blocking dummy for the other characters. Jaffa's werewolf and Viking's bear summon (Teddy) were much more effective.

No problems with the rest of the Plains of Despair or the City. (At least, I assume it was smooth sailing since I didn't think anything was important enough to warrant a screenshot!) Still working through the same session, we cleared the River of Flame and proceeded to do the Hellforge quest:

For a large team variant like this one, Hey Fatso doesn't pose a great danger. Stick a few pets in his face and take him down at range with Fissure, Boulder, Tornado (not present on this night), and Arctic Blast. Even showing up as an LEB isn't as bad as you might think. The real danger that he poses is for a pure melee character, and Jaffa and I could simply back off to heal when injured, letting Teddy do the tanking. All in all, a well-executed fight.

We would later go back and run the Hellforge quest multiple times, de-partying so that only a single character would get credit each time. This was an easy run to carry out at the end of a session, when there were 15 minutes left over and not enough time to start a new area. Eventually, everyone would get the quest knocked out, turning up some decent runes in the process. We even managed to pull two Um runes (which you won't get often in untwinked one-pass runs), one of which I socketed into my keeper armor later. Very nice!

While doing the River Maze in the next session, I leveled up to 64 and noticed something funny:

2999 life - ha! I would need another full level to go over 3000, sadly. Note also the ridiculous Bonesnap damage (this is only Nightmare, remember!) and my embarassingly low attack rating. It was about this point that I swapped over to pure Maul on the attack, as the normal one couldn't hit for beans anymore.

Most of the Chaos Sanctuary was routine, however this guy gave us an interesting fight:

His Fire Enchanted created an immunity, knocking out Fissure and greatly curtailing the effectiveness of Boulder as well. With Extra Fast as the other ability, we had a genuine hairball when the minions were present, zipping around at a good rate. Once they were taken out, we could begin the long process of wearing down the boss. It was at times like this that Jaffa, Viking's Teddy, and my own werebear really made their presence felt. And while Zed's Arctic Blast may not have been doing great damage, it definitely made things immensely easier for our melee characters to get the kill! Once we had the boss pinned, Namarie could sneak up to close range and unleash Tornadoes all over the place. That helped a lot.

Usually when dealing with the seals the best plan is to open them and then port out to safety, returning via the River waypoint. With Shockwave and pets to tank, we were able to open the seals and just fight the seal bosses where they stood:

Shockwave has most of the minions staring vacantly into space, while a torrent of elemental attacks rip into the Infector. Since this was only Nightmare, the Venom Lords were not fire immune, making the battle much easier. Although it's a little hard to see, fortunately the Infector has turned up with Holy Fire enchantment, rather than the similar-looking (and much more dangerous!) Might aura.

The tail end of the same battle. The Infector is getting a serious ass-kicking in this shot. Ha!

The other two seal bosses were uneventful.

Diablo put up an interesting fight. His attacks were a little too strong to stick with the usual "stick the tanks up front and let the mages take 'em down from range" approach, and Diablo wanders around anyway, making him difficult to contain. I found that I could take a full shot from his Lightning Breath of Doom without dying, with my maxed fire/lightning resists and 3000 life, although generally it was a good idea to move around and avoid taking unnecessary damage. We made sure to tag Diablo with a Prevent Monster Heal item and kept plugging away until he went down. I don't recall if there were any deaths in this battle, although I think the big guy got one or two.

On to Act V, where this boss caused some headaches:

Extra Fast/Teleportation had him moving around pretty good, while Extra Strong made those tentacles (or whatever they are) that go through the ground pack a punch. That's an Ignore Target's Defense attack too, like so many others in D2. Still, with the ability to shut up the minions and nearby archers with Shockwave + pets, this was handled fairly well overall.

Gloams put on some light shows down in the icy caves:

Now if there's one immunity that doesn't matter one iota for our team, it's lightning. Not a single one of our attacks/skills uses lightning! The Gloams weren't a big deal for most of us, except poor Namarie and her negative lightning resistance - ouch! Almost impossible to avoid a couple of deaths under those variant restrictions.

A good picture of our pets in action. Teddy and the Spirit Wolves engage Frozenstein while Fissure and Boulder tear them apart at range. Very little danger here. One thing that I did begin to notice was that Mana Burn bosses like this had an interesting side effect: one hit would instantly deplete my meager mana orb, which meant that I would unable to lock up the boss' minions with Shockwave. While it didn't matter in a fight like this, at other points later on it would become a larger concern.

When playing a team variant online, there are often times when it's necessary to secure a night's progress by jumping ahead to the next waypoint, or running through an already-cleared area to the next section to avoid repetition. For the Rogue Revival team, we had Teleport to set up these kind of portaling endeavors. In this variant, the same role fell to my werebear and his ungodly life orb:

Here I am in the Frozen Tundra, with a huge mob following me as I run run run looking for the waypoint. Great fun.

Now that Nihlathak's Corpse Explosion has finally been fixed, the fight is actually entertaining to play rather than an instant death trap. We mopped up the minions as best we could, then went after the pale gray figure himself. Fissure did much of the work even before we finished off the summoned minions. Teleportation wasn't nearly enough to save the boss from destruction.

And then it was time for the Ancients...

I lured Talic after myself, while someone else (can't remember, sorry!) got Madawc to tail them. The rest of the team then proceeded to take out first Korlic, then Madawc, and finally we all united to take down Talic (pictured above). Cursed was a bit of a bad draw; he did too much damage for me to tank for any length of time. Teddy and the Spirit Wolves pulled their weight here in a big way, as our mages worked him down at range. Rather difficult to keep a Whirlwind barbarian pinned for any length of time too!

I missed the fight with Baal due to an aforementioned basketball game. However, my character was present in the game (although not playing, sitting in town) due to an extra computer that one of our other team members had on hand. Fortunately, T-Hawk was kind enough to snap a few pictures for us: 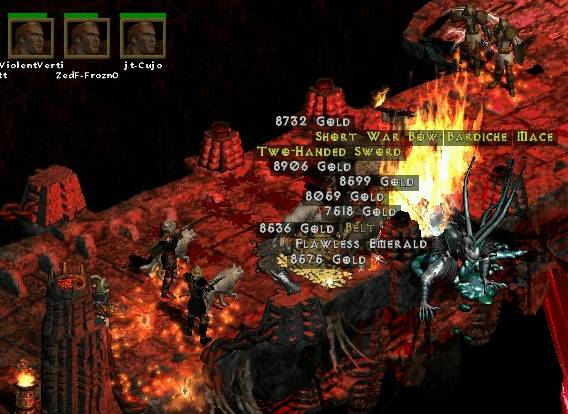 Terrible item drops from Baal - he dropped mostly GOLD, of all things! The only item of any interest there is Nightsmoke (unique belt), and even that's nothing to brag about. Good thing we're not in this for accumulating l33t gear, heh.

Then the team went ahead and played the Secret Cow Level: 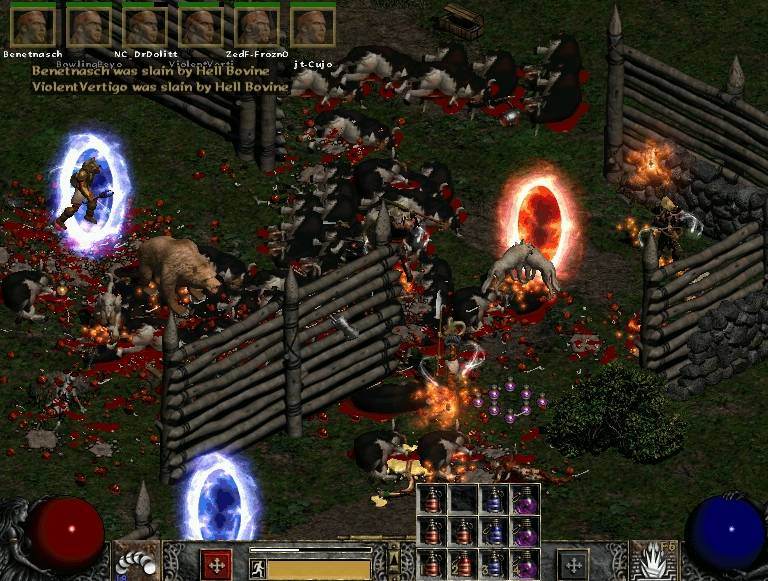 I'll let T-Hawk provide the description: "No fewer than FOUR cow boss packs spawned within immediate range of the portal! The Cow King and three random bosses, with one being Fanaticism! No room to run - running just woke up more cows, as did summoning druid pets! We suffered two deaths. Too hairy during the fight to grab screenshots; the above one is from after the fact. You can see somebody's pile of purple rejuvenations dropped on death there, and the gibs from a Fire Enchanted cow boss on the left side.

And this is why we aren't playing hardcore."

Too bad I wasn't there - I think they could have used my help!

So there you go. Nightmare completed and full-cleared end to end, one pass through using only the gear we find along the way. I suffered a total of two deaths in Nightmare: both to Fire/Lightning Enchanted bosses (Fire Eye and Bremm Sparkfist) and the buggy interaction between their abilities. I had missed a lot of playtime, far more than I wanted, so I wasn't particularly pleased with my performance in Nightmare as a whole. I resolved to do better in our third and final trip through the game, facing the ravages of Hell difficulty.