This section details the new features on the tech tree; what governments have been added, where the new units and wonders pop in, and other features that may have changed. There are a few other surprises as well, such as some new optional techs and a different spaceship path to follow in the Modern Age. I'll also talk about some of the government changes, especially the new governments of Feudalism and Fascism, and a bit about how I saw them play out in practice.

Alphabet: Curraghs are enabled by this tech. It is also the starting tech for Seafaring civs.

Pottery: This is the starting tech for Agricultural civs. Probably could have seen that coming.

Writing: Does NOT enable contact trading anymore. Writing allows you to found embassies and sign military alliances still, but contact trading has been pushed WAY back on the tech tree to allow a greater role for exploration.

Mathematics: Enables the new wonder Statue of Zeus, the one that produces Ancient Cavalry. More on that in the next section.

Philosophy: This tech has a new feature; the first civ to discover it gets a free bonus tech, just like the two that you get for building the Theory of Evolution wonder. Naturally, this has greatly increased the desirability of what was previously a relatively uninteresting wonder. It also enables the new wonder the Mausoleum of Mausollos.

Polytheism: Enables the final new wonder of the ancient age, the Temple of Artemis. Now there's something besides Monarchy on the bottom part of the tree.

Construction: Lets you build barricades in addition to fortresses. Barricades are essentially super-fortresses; more on them later.

Engineering: This is the tech where Trebuchets come in.

Chivalry: Enables the new wonder of the Middle Ages, the Knights Templar. Makes sense to me.

Printing Press: This is now the tech which enables communication trading. A little later than Writing, huh? There is now thus an actual reason to research this tech besides simply trying to trade it away or proceed on to Democracy.

Astronomy: Explorers have been moved up to this tech from Navigation to allow players to scout with them a little bit earlier.

Navigation: This is now the tech which gives the ability to trade maps. No more having the entire map revealed by 1000BC; if you don't search out the other civs, they aren't going to find you. I don't know all the implications for how this has changed the game, but it certainly plays very differently now compared to before. 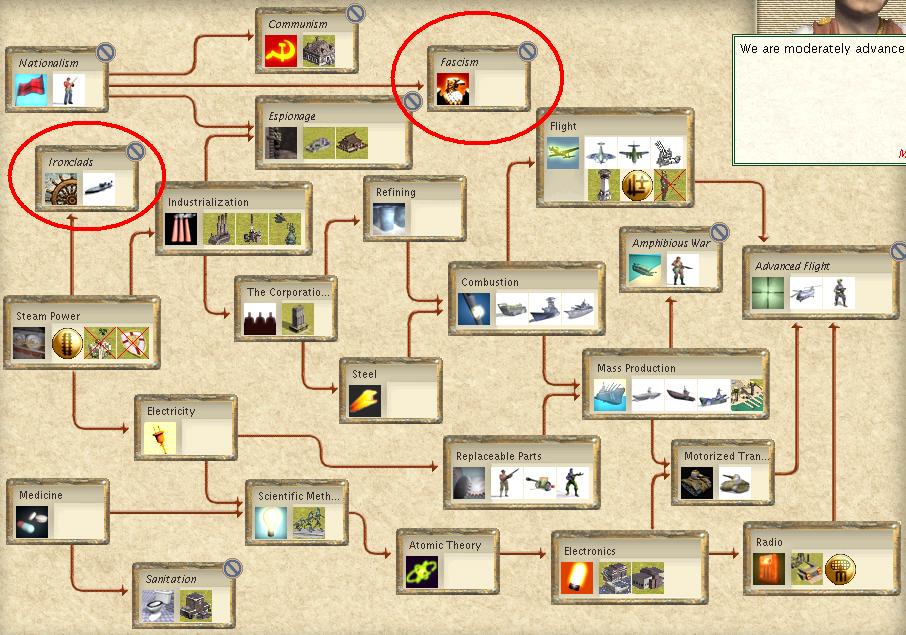 Ironclads: Note the new look to the Industrial Age tech tree; I circled the new optional techs in red. This tech is entirely new and does nothing more than enable ironclads (which have undergone a major stat boost). It usually is ignored by the AI civs and has the effect of prolonging the era of sail by quite a bit.

Espionage: Enables the new small wonder Secret Police Headquarters, a corruption-fighting building which only works under Communism. More on that below.

Fascism: Ummm, what can I say. This optional tech lets you change your government to Fascism; it doesn't do anything else. Your call on whether it's worth researching.

Flight: Flak added with this tech. Even less of a surprise that this tech gives you the first air defense unit.

Rocketry: This tech has significantly increased in importance; it adds both Mobile SAM air defense units and the TOW Infantry resourceless unit. If you are hurting for better anti-aircraft or lack the resources for mech infantry, you should probably go after this tech first in the Modern Age.

Satellites: Upon discovering this tech, the whole map is revealed to your civ. I'm pretty sure that this is the minimap and not the actual map, but I'm not exactly sure so don't quote me on it. This feature wasn't added until the end of the testing process, so I have not personally seen it in action.

Robotics: The most critical change to the Modern Age was moving one of the spaceship parts here to this tech. The SS Stasis Chamber (the one that requires both aluminum and uranium to build) has been moved here, to a tech which usually was never discovered before the game was over. Now those Radar Artillery and Manufacturing Plants may actually have a role to play in deciding games. I applaud this change and think it will make the Modern Age a lot more entertaining. 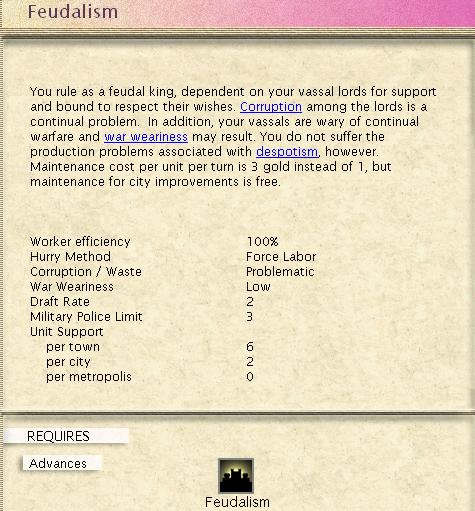 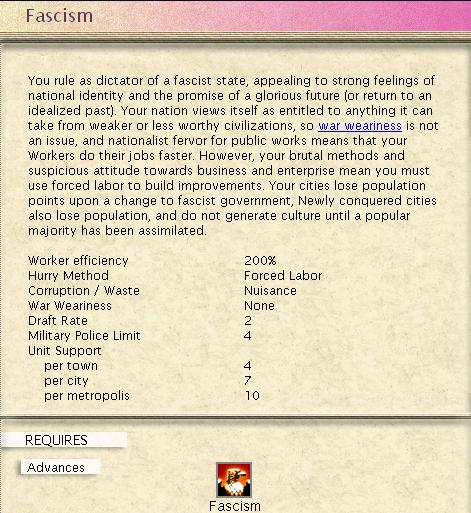 Feudalism: This is definitely one of the strangest governments in Civ3. In order to model the decentralized and rural nature of feudalism, BreakAway gave unit support in the opposite direction from all other governments; MORE support for towns than cities and metropolises. Feudalism has the same corruption rate as Monarchy and also benefits from no maintenance on any city improvements, so if you have lots of small towns it is actually easily possible to be paying nothing in maintenance costs whatsoever. The big downsides are the need to use forced labor and the pricey 3 gold/turn for each unit. That high unit maintenance cost means that as your towns grow into cities and you lose your unit support, costs are going to start going through the roof (this is supposed to simulate the Commercial Revolution of the High Middle Ages, for you history buffs). I believe that Feudalism can potentially be very strong in the right circumstances, but I can't help but be confused by its purpose. Growth is power in Civ3; you WANT your towns to grow as much as possible as fast as possible, and Feudalism actually penalizes you for this. Seems a little counter-productive to me. But there definitely may be circumstances where this could be the best government for your civ, especially if you have lots of very small towns. Until proven otherwise, however, I'm sticking with Republic.

Fascism: Hmmm, well, it's certainly a strong wartime government, but you pay a VERY high price for the benefits. The pluses of Fascism include the fastest workers of all governments (even faster than Democracy), no war weariness, the same corruption rate as under a Republic, and very high unit support. Now for the downsides. Fascism uses forced labor (of course), which is almost always a negative in terms of flexibility in the later ages. Upon switching to Fascism, ALL of your cities lose population points to represent a purge of the party coming into power. I believe that towns lose 1 population, cities lose 2, and metropolises lose 3. Newly conquered cities will also lose more population than usual (though considering the risk of flips, this may be a plus!). Finally, Fascism has a tag in the editor called "Xenophobia" which means that no cultural buildings can be built in a city unless a majority of the citizens are of your nationality. This is definitely a major inconvenience, and probably will result in a scorched earth policy of razing most enemy cities. I personally have no intention of touching Fascism; it does have strong advantages, but is probably not worth the price in anything but an apocalyptic all-out war scenario.

Communism: This isn't a new government, naturally, but once again Communism has been improved in the expansion. Optimal city numbers have been increased on all map sizes, which has the effect of lowering corruption overall and helping out Communism. There is also a new small wonder called the Secret Police Headquarters, which functions as a second Forbidden Palace and only functions under Communism. Compared to the original (1.07f) release version of standard Civ3, corruption is drastically lower under Communism now and has made this an entirely viable form of government. If you need to fight bigtime wars in the Industrial and Modern Age, I would definitely suggest Communism over Fascism; it allows much more flexibility and actually has pretty good corruption now. It's still no match for a Democracy in terms of research, but raw shield production under Communism can definitely be much higher with enough cities.

Republic: Again, not a new government but with one significant change. Unit maintenance is now 2 gold/unit under a Republic, so no more massive armies under a Republic without paying the price for it. While this definitely cramps my favorite government, I agree that it's a good change in terms of balance. Democracy retains the 1 gold/turn unit maintenance, so now there is more motivation for swapping to democracy sometime in the later stages of the game. All is not doom and gloom for Republics though, since unit support was added: 1/3/4 for towns/cities/metropolises. Republics thus have a very strong motivation to get their towns over size 6 to get the extra unit support; you might consider this government to be the anti-Feudalism in that sense. The scaling back of military might of Republics definitely was a step in the right direction in terms of balance.

The next section covers the new wonders and some other miscellaneous stuff like new terrain types.